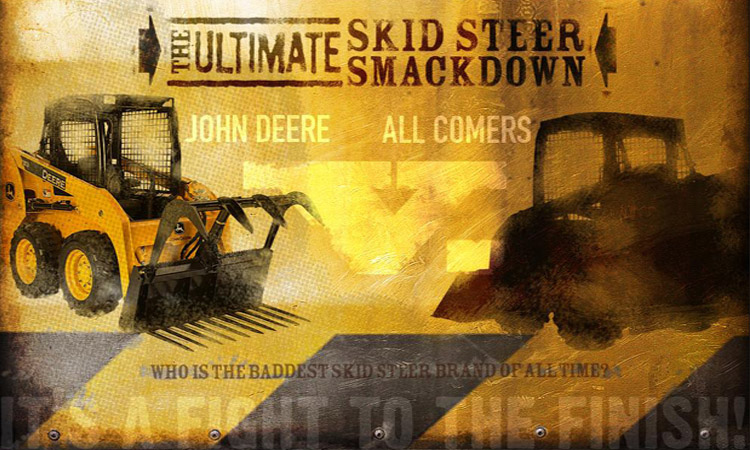 Don’t worry folks, you didn’t miss this one when you slept through American History class in college. This battle holds its own in a much more recent place in our memories. It was the Spring of 2009 when the Ultimate Skid Steer Smackdown came to Bowling Green, KY. The sun was bright and the smell of diesel hung heavily on the air. Teams from five of the leading skid steer manufacturers in the world  had arrived on the scene to battle for the title of “The Best” in competitions of driving power, 360° visibility, power lifting and serviceability. The teams: Bobcat, Cat, New Holland, Case and John Deere.

Round #1 The Hill Climb

The Rules: Each skid must drive over two, 3 foot hills and then over the massive 5 foot berm, Mt. Skidmore. On the other side of Mt. Skidmore they will pick up a bucket of dirt, and return over all three hills again. No excessive tipping would be allowed. The Results: John Deere faced off against each challenger one-by-one, Bocat, Cat, and New Holland and took first place EACH time. The only other competitor to complete the task was New Holland. Watch the video here.

Round #2 The Visibility Test

The Rules: Each skid begins 15 feet away from a white painted line. The skids are to back up toward the line, and the operators are to stop as soon as they are no longer able to see the line. Operators were asked to make sure the seats were back all the way, and to keep both hands on the controls at all times. The Results: New Holland came in first, followed by John Deere, Bobcat, Case and Cat.  Watch the video here. 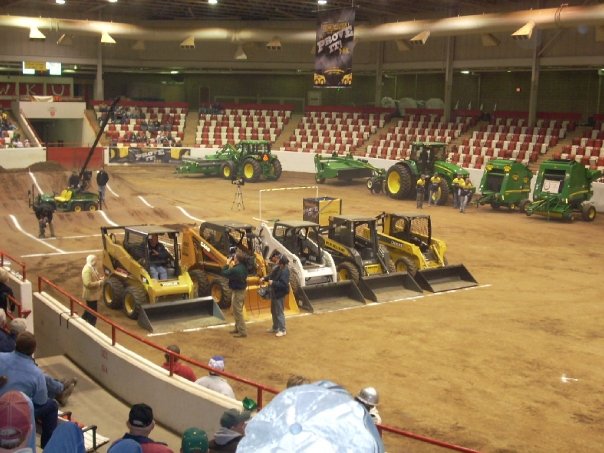 Round #3 The Power Lift

The Rules: Each skid will have 1 minute to lift a 6200 lb concrete load. The load is to be lifted to a set height. If excessive tipping occurs the skid must start over. The Results: First up, Bobcat. After giving the lift a couple of tries, the Bobcat operator had to back down. The weight was just too much. Team Cat was up next, and found themselves in the same boat as Bobcat just a few seconds into the round. Case was next and became the first skid to actually lift the load, but unfortunately, as the load lifted just more than a foot off of the ground the skid tipped forward and was forced to start again. After two tries, the Case operator threw in the towel. New Holland took to the arena floor but struggled to lift the more than 3 ton weight, and eventually gave in. John Deere truly saved the best for last. The Deere was able to lift the load entirely off of the ground and over the required height. Another victory for team Deere. Watch the video here.

The Final Round Serviceability

The Rules: Each operator will be required to perform 3 quick maintenance tasks in a race against time and one another. Operators were allowed to skip any maintenance tasks that were not part of the listed tasks and were allowed assistance if necessary. The Results: The operators leapt to the tasks with impressive speed and precision, but in the end only one could be first. In first place was New Holland, followed again by John Deere, Bobcat, Case and Cat. Watch the video here.

In the end, John Deere would leave the arena victorious, proving that it is in fact, the best all-around skid steer out there.