The Evolution of the John Deere Steel Plow

Dating back to the beginning of civilization, farming has been a large source of food. As populations rose, the demand for these agricultural goods increased dramatically, putting a high demand on farmers producing them. As it became known tilled soil was more effective for seeding and growing, early forms of plows emerged. In this post, we will go back in history and explore the evolution of the John Deere steel plow. 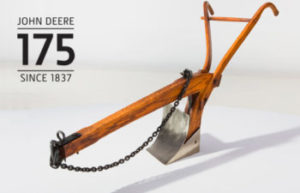 In 1837, John Deere, was a typical blacksmith turning out hay forks, horseshoes, and other essentials for life on the prairie. Then one day, a broken steel sawmill blade gave him an opportunity. He knew that days in the field were difficult for farmers near his home in Grand Detour, Illinois, because they had to interrupt their work to clean the sticky prairie soil off of their cast-iron plows.

He also knew that the soil would slide easily off of a highly polished steel moldboard. Steel was scarce in the area, so Deere fashioned a moldboard out of the second-hand blade. This model opened the doors to John Deere’s success in the future.

Many variations of the original plow were sold leading up to the 1870’s; an 1857 advertisement mentions nine models offered by Deere. Most were similar in design, but different in size or material. The first large change in design came in 1875 when Gilpin Moore designed the first riding plow. Other Sulky plows were on the market at the time, but Deere’s two-wheel Sulky plow was the most popular among farmers.

In the mid-1880’s, a few modifications were made to the Sulky plow, the main change being a third wheel being added. This model also included a “power-lift,” allowing the plow bottom to come out of the ground by simple pressure of the hand on a catch which connected to the land wheel. Variations were made in the mid 1880’s, as Deere offered walking and riding plows in single-bottom to six-bottom gang versions.

The six-bottom gang versions were very heavy, requiring more power than just horses. These plows evolved to become tractor compatible, but Deere was not yet involved in tractor manufacturing.

In 1912, John Deere was public, and appeared on the New York Stock Exchange. The public availability of stock purchasing was very profitable for the Deere Company. In 1918, Deere bought the makers of the Waterloo Boy tractors, giving the company the opportunity to expand its market into the tractor operator plowing business.

1929, a row-crop tractor enters the market. It is the first Deere tractor with a tricycle front to fit between two crop rows, and rear axle wide enough so wheels can straddle two rows. This allowed farmers to use a ride on tractor to perform with twice the width, covering two rows at once.

1953 The Model 70 is launched as the largest row-crop tractor to date. Initially available with gasoline, all-fuel, or LP-gas engine, it will become the first diesel row-crop tractor.