Home Agriculture Get Wrapped Up in the John Deere B-Wrap

Who knew that there was a way to get barn-quality hay without actually using the barn? For growers who are rightfully protective over their hay crop, the John Deere B-wrap is the perfect alternative solution to indoor hay storage, shielding from rain, snow and ground moisture. It’s important for growers to understand the purpose and technology behind the B-Wrap, as many benefits can be gained from using it. We are here to answer some of your questions on this new technology. 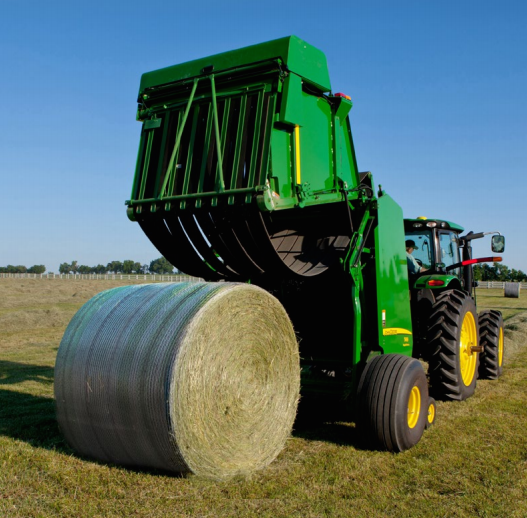 Let’s take a deeper look at how the John Deere B-Wrap technology works to protect your hay bales and see what growers are saying about it.

What does it do?

Working with the John Deere 7 series, 8 series, and 9 series round balers that are equipped for net wrap, the B-Wrap provides growers with a dependable way of preservation. It protects hay, straw and crop residue as if it were stored inside. Here is the secret – it incorporates patented material including Tama SCM Technology.

This innovative technology works to do the following two things for your hay. It sheds water to keep any unpredictable moisture from entering and damaging the quality of the hay. And, it has tiny pores that let any existing water vapor inside the bale get out. For decades, farmers have tried time and time again to cover bales with creative contraptions and waterproof plastic, only to discover mold in their bales that was caused by water leakage. The John Deere B-wrap prevents this exact problem from happening by keeping moisture from entering the bale and allowing water vapor to escape. 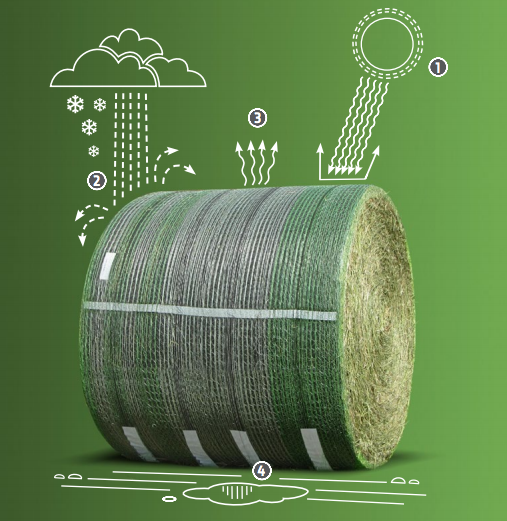 How does it work?

Most balers will only require a simple B-wrap kit that can be installed by any John Deere dealer. You can be easily switch from net wrap to B-wrap in only a matter of minutes and go about your baling routines, just as you would when using Netwrap. Once a bale has reached it’s full size, the operator can halt and let the wrapping take over.

The first dimension of the John Deere B-wrap is made of CoverEdge Netwrap, which is placed over the edge of the bale to attract loose remains and form a stronger structure around the bale. As mentioned prior, another essential material is the TamaSCM technology which guards the hay from harmful weather conditions like sun, rain, snow, and other moisture.The final length covering the bale is more John Deere CoverEdge Netwrap, with two wraps of net toil to hold the TamaSCM in place.

What are growers saying about it?

“Our cattle will go and eat hay from a B-Wrap bale before they eat a net-wrapped bale, even though the hay came from the same field, baled the same day. And for bales covered in snow or ice, the B-Wrap comes off so much easier than net” – Darron Schoen, dairy farmer, Freistatt, Missouri

“After a year stored outside, you open up a B-Wrap bale and it’s just like the day we baled it. At the hay auction there was a lot of interest, and our B-Wrap bales were the highest-priced hay sold that day”. – Mark McGrory, hay and grain farmer, Victor, Iowa

“We are starting to use more straw in our dairy ration. By using B-Wrap instead of net we dramatically cut our storage losses. We probably went from a 15 percent loss with net down to a 2 or 3 percent loss with B-Wrap. Even after a winter outside, with B-Wrap we have such nice and clean straw, just like the day we baled it”. – Steve Harre, dairy and cash crop farmer, Nashville, Illinois

Whether it’s hay that needs to be kept through the winter season or is going to be sold, the John Deere B-Wrap works to preserve fresh crop. We would love to hear from you with any other questions! If you enjoyed this post or want to read others, feel free to connect with us on Facebook or Google+!