Last week, we took a stroll through the 1970s, looking at the decade that brought about significant advances for John Deere riding mowers. Some of these advancements included upgrades to existing series, but a couple of new series were also introduced, making Deere a bigger player in the riding mower industry.

Today, we will look at some of the most critical upgrades and introductions of the 1980s, a decade that not only helped mend the gap between past and present, but also represented Deere’s 150th anniversary. Without any further delay, let’s go back in John Deere riding mower history once again!

Going Diesel: A few years into the 80s (1984 to be exact), John Deere made yet another splash in the pond of garden tractors with the introduction of the John Deere 430. This was Deere’s first tractor to combine a diesel engine with hydrostatic drive and power steering. The 430 was virtually a 420 model powered instead by a Yanmar 3-cylinder water-cooled diesel engine. Attachments and other general riding features remained the same as the 420, but the weight of the machine was increased to 1170 pounds, making it the heaviest and strongest John Deere garden tractor to date.

The “R” and “S” Series: For those looking for an economy riding mower specifically designed for smaller plots of land, the R Series (R70, R72, and R92) was a perfect fit. Standard features on the R Series included 5-speed gear-drive transmission for dependability and long life; in-line gearshift for on-the-go shifting; full-length welded steel frame, and a tight turning radius of 27 inches. The deluxe S Series riding mowers were designed for those who had lawns that were just slightly larger than those optimal for the R Series. The S80 and S82 had 8 horsepower engines with a 30-inch cutting width and electric start.

While we’ve highlighted most of the upgrades made to John Deere riding mowers in the 80s, here are a few charts showing the mowers by model, year, and serial number. 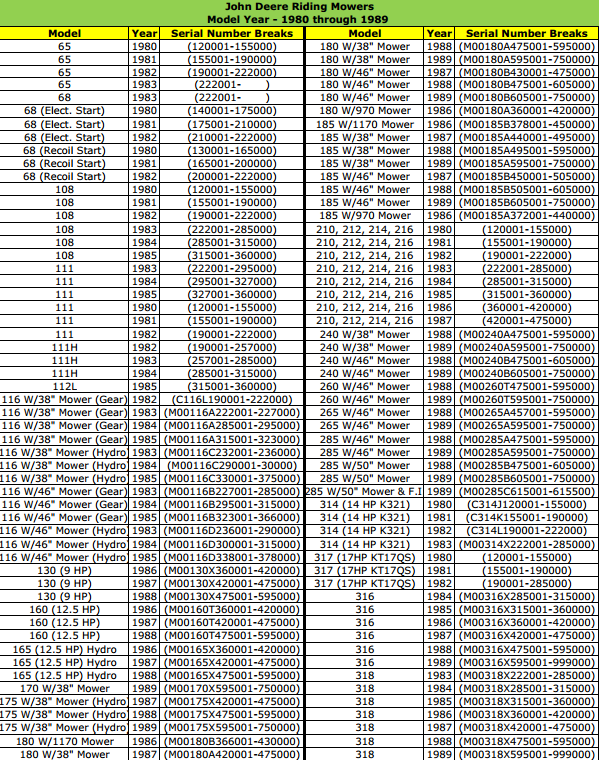 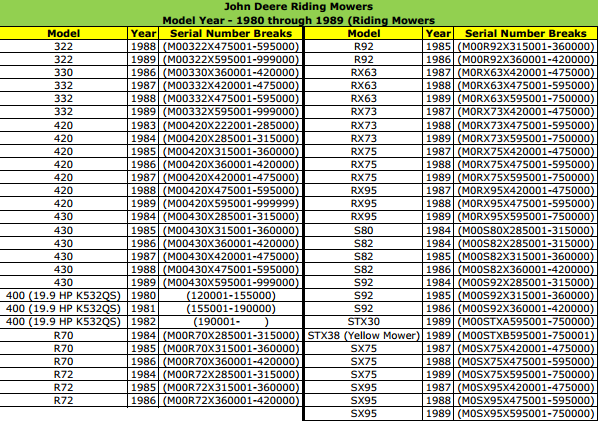 Hopefully, this trip back to the 80s provided a nice snapshot of the landmark improvements and introductions Deere made to its riding mower line at the time. Be sure to come back to our blog when we dive into the 90s edition of John Deere riding mower history! If you enjoyed this post or want to read others, feel free to connect with us on Facebook or Google+!