Reminiscing on the Past with John Deere Riding Mower History: 1990s

In our previous post around John Deere riding mower history, we looked back at the 1980s, a decade that seemingly mended the past with the future. This time period marked Deere’s lawn and garden break-in to diesel, the introduction of the “R” and “S” Series, and a few key changes to existing models. Need to brush up on this topic? Check out this post around John Deere riding mowers that made history in the 80s.

In this post, we will look at some of the most critical upgrades and introductions of the 1990s, a decade that furthered Deere’s growth in the industry and provided customers with more lawn and garden tractor versatility than ever before. Without any further delay, let’s explore another decade in John Deere riding mower history!

By the time the 90s rolled around, Deere’s production of lawn and garden equipment was growing exponentially, both in numbers and functionality, as compared to the previous decades. Deere sold its 2 millionth lawn tractor (a LX188) in 1992 and followed that up with its 3 millionth sale (a LT133) in 1998. In addition to rising sales, the company also introduced a few landmark models that are critical to John Deere riding mower history. Let’s look at some of the details surrounding these memorable 1990s models.

Coming off the Horicon, Wisconsin assembly line in the late 1990s, the LT Series (133, 155, and 166) quickly established itself as one of the most popular John Deere mowers to date. The series provided operators with high-quality wide cuts and held a greater amount of fuel than other competitive models in its range. Its adjustable operator seat provided ample comfort for owners that spent long days on their equipment and the new Xenoy (plastic-like) material kept the body in better condition than previous steel-hood models.

Beginning in 1990, the production of this series lasted 16 years, offering a number of different models. The LX Series will likely be remembered for its versatility as each model was compatible with several sizes of mower decks depending on the operator’s needs. Outside of mowing capabilities, the LX Series was also great for a variety of other projects around the yard. Most notably, the LX Series riding mowers were compatible with snow blower attachments that latched on to the front of the machine, allowing operators to make easy work of pesky winter storms.

The GT and GX Series were both in production for the majority of the 90s and were quite similar in style and functionality. Both series featured quality pieces of lawn and garden equipment that were designed to take on plots of land up to about 4 acres in size. Both series could connect to a vast selection of implements like snow blowers, front blades, baggers, and carts as well as a number of rear attachments like aerators, utility carts, and more. The GX and GT Series were great for property owners that demanded a little more power and size for their weekend activities.

Now that we’ve highlighted most of the upgrades and new additions to the John Deere riding mower line in the 90s, here are a few charts showing the complete list of mowers by model, year, and serial number. 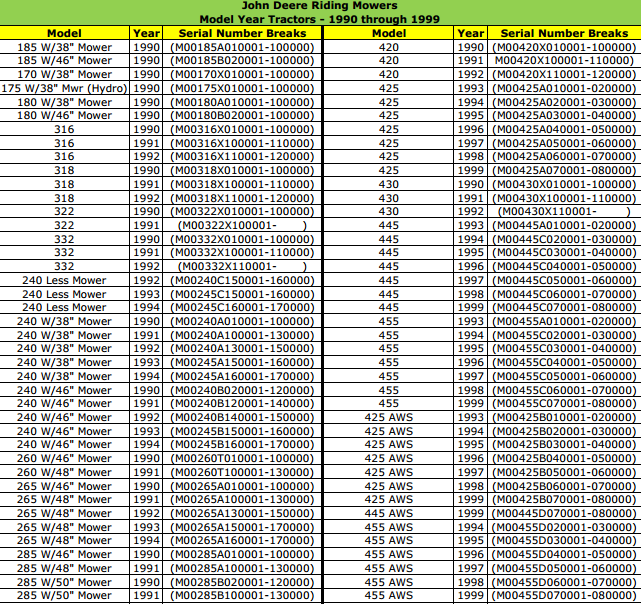 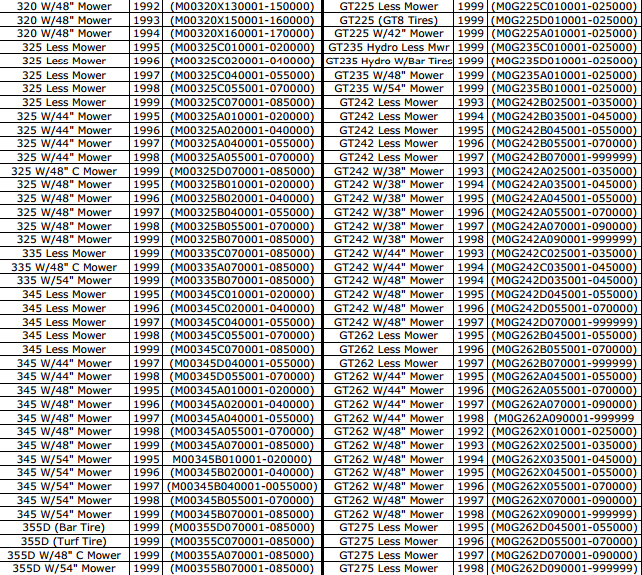 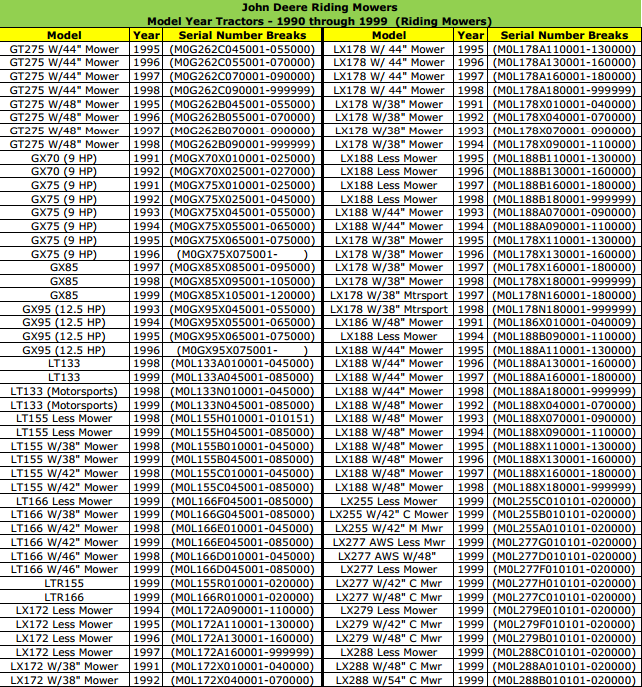 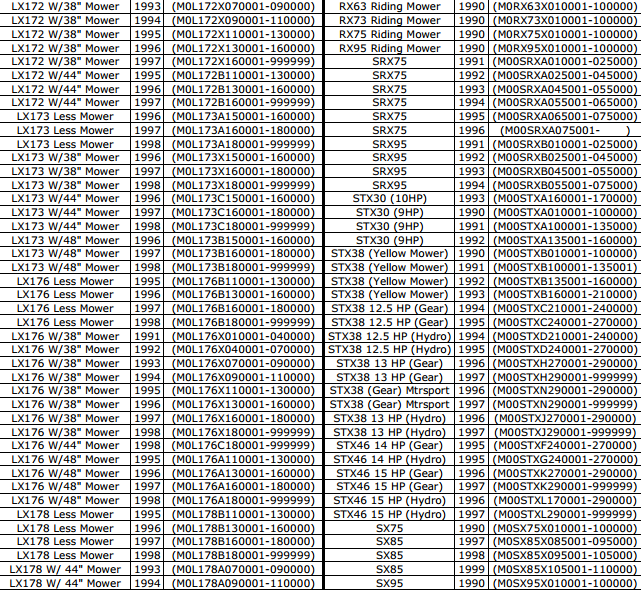 Interested in learning more about the history of John Deere riding mowers? Check out this post which looks back at the 1960s all the way through to the 2000s.

If you have any questions about John Deere lawn and garden equipment, you can contact your local John Deere dealer.