Winter Storm Jonas will not soon be forgotten by those that were affected. According to The Weather Channel, Jonas stands alongside some of the most prolific winter storms that the East Coast has ever encountered. Thanks to the storm, some parts of West Virginia were buried under more than 40 inches(!) of snow, while other states and major cities were left with digging out to do as well. 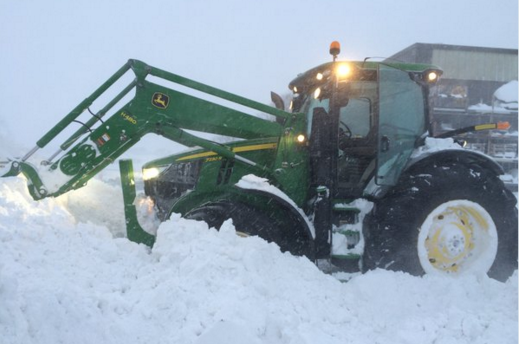 In fact, Jonas was the biggest snowstorm ever witnessed in several popular locations, including:

However, the Northeast and Mid-Atlantic weren’t the only areas left covered by ice and snow. Winter Storm Jonas reached into the South and Ohio Valley as well, covering parts of Mississippi, Nebraska, Kansas, Illinois, Indiana (and more).

As we monitored the storm on Twitter, we noticed no matter how much snow John Deere equipment owners were left with, it didn’t stand a chance. Here’s a look at some photos we gathered during and after the storm of John Deere fans cleaning up:

Cleared over 3 ft of snow with nothing other than this @JohnDeere #greenandyellow pic.twitter.com/JjuZq5cSPj

Always great to see GREEN pull into the yard when there is a fresh dump of snow. #bestneighbours #johndeere pic.twitter.com/d6kvDzLSsX

This @JohnDeere 7230R getting it done! Drifts were higher than the marker light on the rear fender! #snowmageddon pic.twitter.com/clQrZyXZ9P

One dedicated doc came to work in this tractor #dedicated #snowmaggedon2016 #awesome pic.twitter.com/aGvOMYlYav

We hope everyone survived the storm in good health and good spirits. The photos above show our fans’ commitment to Deere and the equipment’s ability to be a useful asset 365 days a year, regardless of what Mother Nature might toss our way.