A Look Back at the Foundation of John Deere Planter History

Today’s John Deere planters allow producers to plant corn, soybeans, cotton, sugar beets, and popcorn accurately at 10 mph thanks to top-notch technological features. But, where did it all begin?

To better understand how planting equipment got to where it is today, we’ve put together a list of some of the most critical moments of John Deere planter history, enjoy!

Driven by the industry’s need for an accurate corn planter, Charles Deere (John Deere’s son) and Alvah Mansur (a Deere family business partner) formed the Deere & Mansur Company to manufacture planters. At the time, the planter company was operated separately from the Deere plow company in a small two-story building in Moline.

Soon after the partnership was formed, Deere & Mansur released the Deere Rotary Adjustable Corn Planter, which hosted an innovative rotary mechanism that made it an instant hit. Due to the success, the operation outgrew its small space, moving into a larger location in Moline where planter innovation continued.

Deere & Mansur introduced the Deere Center Lever Corn Planter, which featured a center lever that was designed to easily raise or lower the runners. The lever could be accessed by hand or foot to accommodate the farmers that unfortunately lost limbs in the Civil War.

Deere & Mansur was recognized as the largest planter manufacturer in the world.

The No. 9 check-row corn planter was brought to the market. Due to its ease of use and supreme accuracy at the time, this planter was dubbed as “the foundation of John Deere planter leadership” by a 1940s The Furrow magazine article.

Deere & Mansur was acquired by Deere & Company, as they eyed a full-line of farm equipment manufacturing.

The No. 999 was created. The planter hosted natural-drop seed plates, enclosure of both clutch and variable-drop gears, a safety fertilizer attachment, tongue truck, simple positive valve action and special plates to handle the various types of hybrid corn.

Due to the popularity of tractors, the need for a faster planter became apparent. In response, Deere released the four-row No. 450 Tractor Corn Planter. Attached to a tractor, this planter allowed farmers to plant 40 to 50 acres in a single day.

Seed-selection plates became a thing of the past as the 1200 and 1300 Series Plateless Planters hit the market. The new “finger-pickup” mechanism selected seeds one at a time, similar to the way a farmer would manually.

Another big step in innovation was taken as Deere released the 7000 and 7100 MaxEmerge™ Planters, which allowed seeds to be placed at a more precise depth than ever before. In addition, Deere introduced the Tru-Vee™ opener system, which used a pair of angled disk blades to cut well-formed seed trenches. Both of these systems propelled Deere’s planter popularity to new heights by the 1980s. 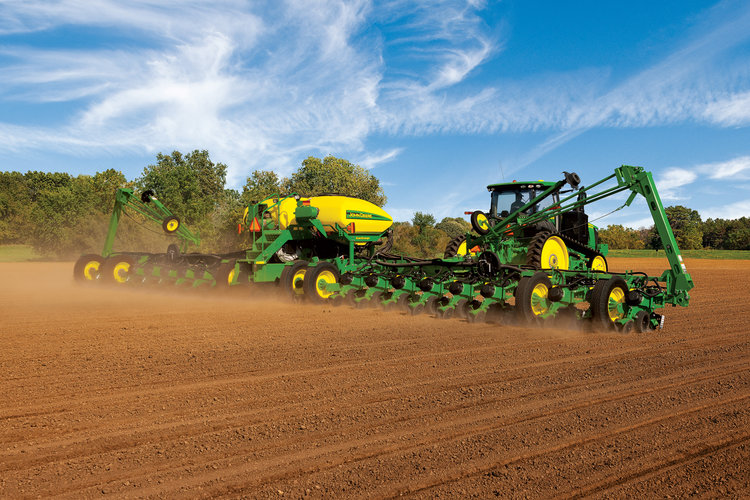 Next time you fire up your John Deere planter, think about the monumental moments that have led to today’s technology.