Home Agriculture John Deere History: A Timeline of How We Got Here

Today, John Deere is known for its award-winning innovations, but have you ever really thought about how we got here? The most critical moments in John Deere history date back to 1837 when the man himself, John Deere, was a blacksmith in Grand Detour, IL who wanted to make farmers’ jobs a bit easier.

Fast forward over 180 years, and this company is still manufacturing equipment with the same purpose in mind – helping customers be as productive as possible. While Deere is widely known for its various tractor models, these machines were not being produced until 1918 – this is when the company purchased the Waterloo Engine Gas Company.

In addition to producing various types of equipment throughout the years, this company has also seen various leaders, logos, and factories over time. It is these individual moving parts that have made John Deere history so fascinating to reflect on. With an ongoing commitment to innovation, agriculture, and people, Deere has had no shortage of amazing breakthroughs that have established where it is today and where it will be in the future.

Let’s take a closer look at these moments in John Deere history. 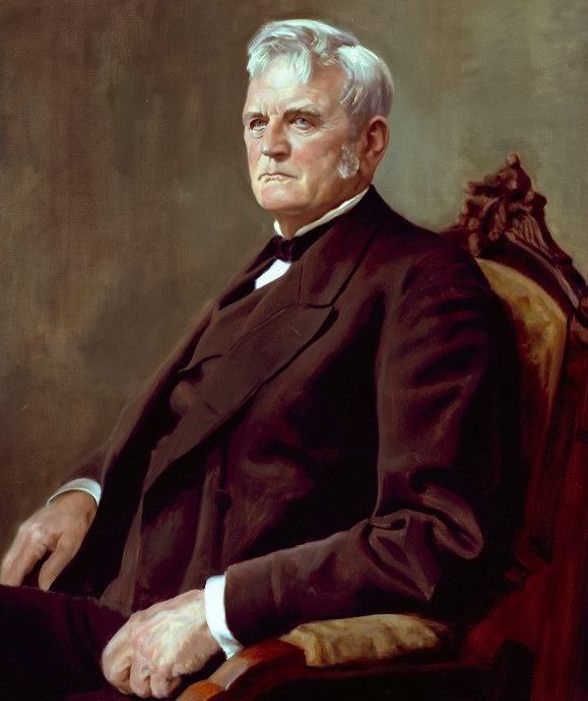 John Deere the company would not have been possible without the determination of John Deere the man. From the time he created the first steel plow in 1837, Deere was committed to helping farmers handle their daily tasks with ease. As demand for these plows rose, Deere moved the business from Grand Detour to Moline, IL in 1848 due to the power and transportation benefits this new location offered. Just two years later, around 1600 plows had been produced and John Deere began to expand its range of equipment, including the first ride-on plow, the Hawkeye Riding Cultivator, which relied on horses. This implement was first introduced at the Iowa State Fair in 1863.

As we look back on moments like these in John Deere history, it is critical to understand those who were at the forefront of this success.

The second son of John Deere, Charles Deere, took over leadership in 1886 before his father’s passing that same year. During his time as head of the company, Deere used his experience as a top salesman to establish John Deere’s first branch house in Kansas City. These branch houses “provided valuable information from the field that influenced new product development”. By the time of his death in 1907, Charles Deere played a central role in John Deere history by helping the company become one of the top implement makers in the country.

Just 15 years after joining Deere & Company as an assistant buyer, William Butterworth, son-in-law of Charles Deere, became president of John Deere in 1907. Under his leadership, 11 factories and 25 sales organizations were consolidated into one entity – this led to the development of the modern Deere & Company. The overall product line continued to expand during his time as head of the company; this includes entry into the combine harvester market in 1912 and the tractor business in 1918 through the purchase of the Waterloo Engine Gas Company. Once retiring in 1928, Butterworth became the company’s first chairman of the board and was elected to the US Chamber of Commerce before his death in 1936.

As the great-grandson of John Deere, Charles Deere Wiman started at the company as a line employee and eventually advanced to become president in 1928 with the retirement of his uncle, William Butterworth. Despite hardships resulting from the Great Depression, Wiman worked hard to ensure John Deere would continue its success. This led to the introduction of the famous Model “A” tractor in 1934, which was followed closely by the Model “B” the following year. Without this sense of dedication to the company, this important piece of John Deere history would cease to exist.

Just two years after joining Deere & Company as a territory manager in California, William Hewitt was named director in 1950 and became president after Charles Deere Wiman, Hewitt’s father-in-law, passed in 1955. From this point forward, the company began to establish itself as a multinational company, purchasing a share of a tractor company in Mannheim, Germany and acquiring land in Monterrey, Mexico in 1956. As John Deere expanded its global reach, the company also welcomed new four- and six-cylinder tractors under Hewitt’s leadership. These models – called the “New Generation of Power” – were officially introduced in 1960.

Despite not being related to the man himself, Robert Hanson was still able to leave his mark within John Deere history. Hanson was named the president of Deere & Company in 1978 before being elected chairman and CEO following William Hewitt’s retirement in 1982. In the midst of difficult recessions in the 1980s, Hanson helped the company not only stay afloat but also exceed sales expectations. This positive trend continued and saw John Deere enter the health care market in 1985 with the formation of John Deere Health Care, Inc.

Once elected as chairman of Deere & Company in 1990 upon Robert Hanson’s retirement, Hans Becherer stressed values that have played key roles in John Deere history since the creation of the first steel plow. A dedication to constant innovation and global growth enabled immense changes, such as the formation of a separate operating division for Deere’s lawn-and-grounds-care equipment operations. During Becherer’s tenure, the company continued to lead when it came to new ag technology and precision farming. Additionally, Deere & Company entered a long-term relationship with the PGA and opened the John Deere Pavilion in 1997 under his leadership.

Having managed a range of operations within the Worldwide Construction Equipment Division, Robert W. Lane had an understanding of what it would take to help Deere & Company attain maximum global growth. By establishing the SVA (Shareholder Value Added) model, the company was able to achieve world-class status in asset efficiency and ROI. This included modernizing traditional factories around the world and ensuring dealer organizations were upgraded in order to better meet customer demands. Upon his retirement as Chairman of Deere & Company’s Board of Directors in 2009, Lane was succeeded by Deere’s current Chairman and CEO, Samuel R. Allen.

Where is the John Deere Factory Located?

As customer demands evolve, John Deere factory locations across the world are designed to keep up. There are over 100 factories in more than 30 countries today. 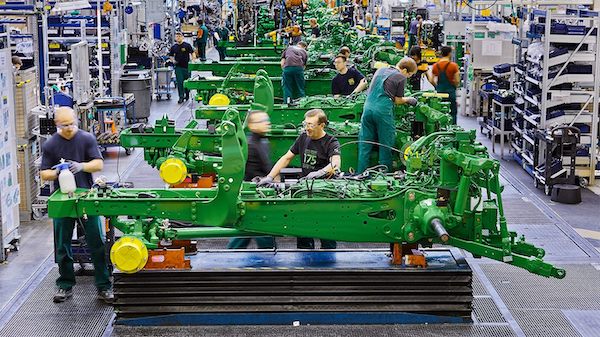 As John Deere factory workers today help produce equipment for agriculture, lawn care, construction, outdoor recreation, and forestry, we should look back at those moments that helped this company stand the test of time.

When did John Deere change their logo?

When it comes to understanding John Deere history, it is important to understand how branding within this company has changed to reflect changes across the business as a whole. Let’s explore these changes and take a deeper dive into the evolution of the John Deere logo.

What all does John Deere make?

At the end of the day, key moments in John Deere history heavily revolve around the equipment. Since creating the first steel plow in 1837, the company has continuously produced machines that are changing the game. Here are some key points in time that stand out.

Over the past century, John Deere has continued to evolve and find success along the way. Through different forms of leadership, logo designs, factory locations, and equipment production, this company has been able to stand out and prove itself time and time again. By looking back at John Deere history, we can prepare ourselves for all that it has to hold in the future.

If you have any questions about John Deere equipment, you can contact your local John Deere dealer.