At Kauffman Stadium, the home of the Kansas City Royals, the groundskeeping crew plays a significant role in the appearance and functionality of the field. By employing a combination of John Deere turf and construction equipment, including 333G compact track loaders, gators and ATVs, and 85G excavators, the teams at Kauffman and Bush Sports Turf were able to work together to complete a seemingly impossible task with precision and ease. 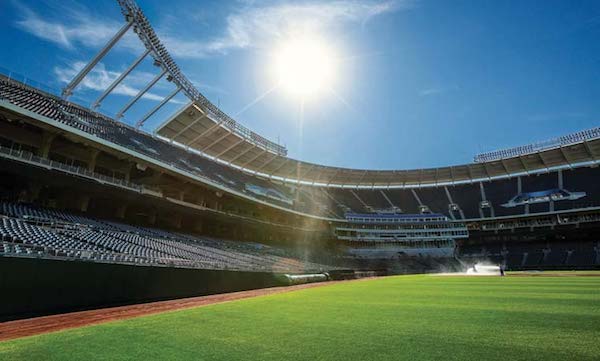 Watch the videos below to learn how John Deere turf and construction equipment turned a groundskeeping dream into a reality.

Trevor Vance, a Kansas City Royals groundskeeper for more than 30 years, explains his love for his job and the expectation of perfection that he has adopted throughout the past 3 decades. By learning how to do things efficiently from the start of his career, Trevor recognizes that without this training, he, his team, and the field would most likely not be in the position that they are in today.

After coming up with the idea to design a crown on the field when the Royals hosted the MLB All-Star Game, Trevor and his team decided that the best method of execution was laying out this pattern with ropes and hoses. Officially cutting this pattern into the field took extreme precision and efficiency, and this is where John Deere turf and construction equipment came into play. Progress was monitored from the upper deck of the stadium where Trevor would call out changes that needed to be made in order to ensure that everything looked exactly how it was supposed to.

Steve Bush and his team at Bush Sports Turf understand that even when time is extremely limited, projects must still be completed with accuracy, always guaranteeing that the end result is perfect. When working on a tight schedule, everything must be taken into consideration, especially when it comes to productivity. From digging to transporting sod, this team relies on the equipment that not only gets the job done quickly but also gets it done right.

The reliability and durability of John Deere turf and construction equipment ensured that the teams at Kauffman Stadium and Bush Sports Turf could accomplish their end goal as efficiently as possible. By utilizing a variety of machines, from compact utility tractors to excavators, tasks that were essential to the project as a whole could be completed almost effortlessly, allowing these individuals to take a tremendous amount of pride in the work that they put in.

We hoped you enjoyed learning about how John Deere turf and construction equipment assisted in a major design project.