Home Construction Interim Tier 4 101: How we got here and what it means to you

This was originally posted on the John Deere, Straightforward Blog, in January. You can view the original post here.

Emissions regulations are a complex and dynamic subject, and even more so for off-highway equipment users who find themselves operating within a rapidly changing regulatory environment. As we move forward in 2011, the United States Environmental Protection Agency (EPA) requires new non-road diesel engines, such as those in excavators, loaders, and tractors, to meet stringent Interim Tier 4 (IT4) emissions regulations.

For diesel engines with 174 horsepower and above, these regulations require the following reductions from Tier 3 levels:

Education on new emissions requirements is crucial, but let’s first take a step back to understand how emission tiers for new diesel engines and equipment entered the landscape to bring some perspective to your path to compliance.

Today’s emissions regulations have their roots in the Clean Air Act of 1970, one of the most significant environmental laws in U.S. history, which created sweeping laws to reduce and control air pollution. Among other air pollutants, the Clean Air Act addresses particulate matter (PM, known as “soot”) and nitrogen oxide (NOx). Nitrogen oxide reacts with sunlight and other substances in the atmosphere to create ground-level ozone, otherwise known as “smog,” and come from many sources, including diesel engines.

The EPA’s “Tier” Emissions Standards: A Result of the Clean Air Act

In an effort to reduce and control these PM and NOx emissions, the Clean Air Act required the EPA to establish and enforce rigorous emissions requirements for all new non-road diesel engines starting in 1996. These requirements are what we have come to know as the “Tier” emissions standards.

The following graph visually portrays this tiered approach from Tier 1, which set limits on PM and NOx emissions, to Final Tier 4, which will take full effect in 2014 and requires further reduction of PM by 80 percent. 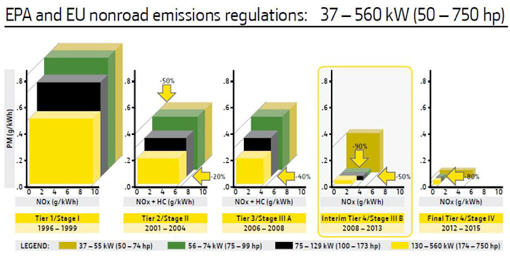 2011 marks the beginning of the move to Interim Tier 4 (IT4), which requires a significant reduction in PM and NOx emissions, unquestionably the most significant step in the regulation process to date. Keep yourself informed and check back often as we dig deeper into these regulations and the impact they will have on your business.