How Griffin Contracting Gets the Most Out of John Deere Technology

Owning a construction business isn’t always easy, but with John Deere machinery, Griffin Contracting owner and president Brent Bazemore is finding it much simpler to operate these days.

Griffin Contracting, which was founded back in 2001, focuses on everything from site preparation to paving. The company has about 80 employees, and although it has grown quickly, Bazemore admits that it has not always been innovative along the way.

“The new L-Series Wheel Loader line is a culmination of customer feedback, industry-leading innovation, and versatile machines that are made to perform in a variety of applications,” said Grant Van Tine, product marketing manager, wheel loaders. “Our customers expect machines that work as hard as they do. Having machines that are designed to improve productivity, provide all-day comfort and perform reliably day in and day out, makes all the difference.”

Visit John Deere at These 5 Trade Shows This Winter

For many, the cold weather and less than ideal weather conditions brought on by winter mean staying inside, which can bring about a sense of boredom. This doesn’t have to be the case for John Deere enthusiasts, though! This winter, the company will be attending a number of trade shows to demonstrate a range of equipment and technologies. In fact, this season of trade shows kicked off in early January when the company attended CES 2020 in Las Vegas, NV. 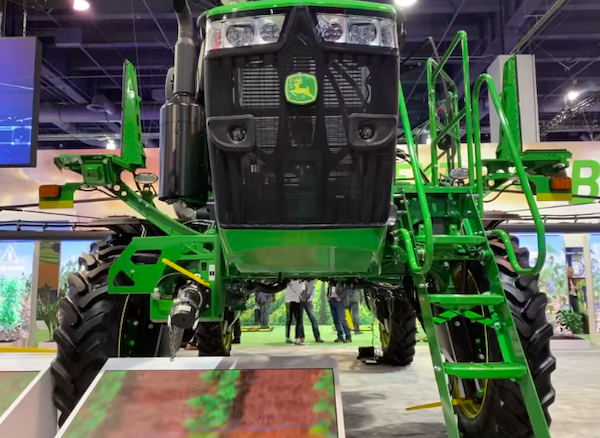 Understanding the Role John Deere Plays at A-1 Excavating

For those in the excavating business, building a fleet of machinery that can be relied on to take on the toughest jobs in the field is critical. This is why Terry and Todd Pecha, co-owners of A-1 Excavating, chose to use John Deere equipment for their specific needs.

A-1 Excavating: Starting from the Ground Up

According to Todd Pecha, it wasn’t always easy-going for A-1 Excavating in the early days. Initially, they started by working with a local silica sand-mining company. They were brought in to do the preliminary site work, and the relationship grew from there.

While the Great Depression and the Dust Bowl presented several challenges for many Americans, both during and after the fact, one of the rare success stories involved the Lemon family. Once Haskell and Irene Lemon graduated from the University of Oklahoma in the mid-1930s, they knew they wanted to stay in the area. They initially worked as equipment operators, spreading gravel on country roads across the state.

“They always wanted to work in Oklahoma City where the state department of transportation is located, but it was dominated by large contractors,” says their grandson Jay Lemon, current co-owner of Haskell Lemon Construction Co., along with his partner and cousin, Ken Wert. “Then, in the late 1940s, they had the opportunity to begin their own paving company.”

Founded in 1896, the International Union of Operating Engineers (IUOE) is a trade union that represents operating engineers who primarily focus on heavy equipment, as well as mechanics, surveyors, and health industry workers. IUOE Local 318 is led by Justin May and Noah Ridgway, who get through their busy days with the help of a fleet of Deere machines, including everything from dozers to articulated dump trucks. Without Deere, their day jobs would be much more difficult.

If you invest in one of the John Deere L-Series Mid-Size Wheel Loaders, you’ll want to take the extra time to maintain your machine to keep it in working order for years to come. With this in mind, there are a few steps you can take to ensure that everything runs smoothly on a regular basis.

Located in the engine compartment is the periodic maintenance decal. Here, you’ll find everything listed from fluid types to fluid locations. Daily checks should always include the transmission oil level in the articulation joint, engine oil level in the engine compartment, hydraulic oil level, and coolant reservoir. These daily checks can be performed safely from the left side of the wheel loader.

When companies need equipment to tackle a wide range of tasks for their clients, they know they can turn to John Deere for reliability and productivity. This is exactly what B&S Site Development did, and the business owners have never looked back.

B&S Site Development provides site-preparation services, including dirt work, concrete, wet utilities, and paving to its customers. The company initially began in the residential sector, but eventually moved into the commercial industry as new opportunities sprung up. The business, which is situated in Bristow, Virginia, saw a boom in demand. The area itself has grown dramatically since the 1980s and has become a home for many companies’ world headquarters.

Exploring the Capabilities of the John Deere 344L High-Lift

The high-lift option has a maximum hinge pin height of 13 feet 2 inches, which is about a foot more than the standard 344L.

When you’re on the hunt for the perfect John Deere equipment for clearing land, removing brush, and cleaning up a job site, you may want to consider a grapple. Scrap and rock grapples can handle a wide variety of tasks, ranging from disaster cleanup to general job site tidying.

All rock and scrap grapple models from John Deere are able to handle large loads and difficult materials. Rock grapples, in particular, have a welded-in serrated cutting edge that easily penetrates all ground conditions. Scrap grapples feature open side with bolt-on side plates, which allows for the easy grappling of material that is wider than the bucket. Additionally, a predrilled lip makes it simple to add a bolt-on replaceable cutting edge for longer wear life.