Since the invention of the first steel plow in 1837, the driving force behind John Deere has been manufacturing equipment that makes the lives of farmers easier. From seeding to harvesting, farmers across the globe rely on John Deere equipment to help achieve their yield goals.

While each season welcomes new tasks and challenges, with the right equipment on their side, operators can overcome any hurdle they may face with ease. This is especially true during the harvest season when farmers are finally able to reap the fruits of their labor. 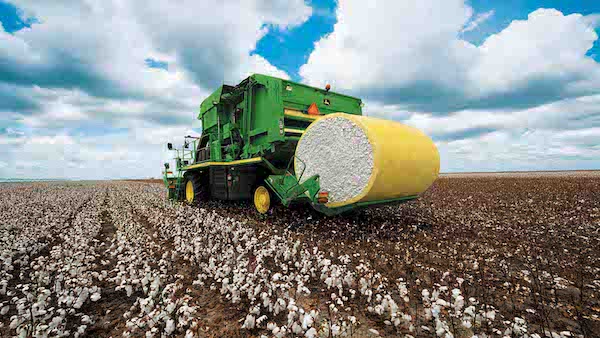 So, what is used for harvesting? John Deere offers a range of combines, headers, platforms, cotton pickers, and more to ensure maximum productivity and efficiency out in the field. The company also recognizes the importance of technology when preparing for the harvest season, including ActiveYield and JDLink Connect.

While many are aware of the critical role that John Deere harvest equipment plays across the world today, some may not know the history behind the machines. To truly understand what has led to the success of this equipment, let’s take a look at how the company got to where it is today.

For over a century, John Deere has continually produced harvesting equipment that has gone beyond traditional technology and systems. Today, operators have access to a range of John Deere combines and attachments that are designed to deliver value, improve productivity, and simplify the harvesting process.

Let’s take a look at some of the equipment that farmers can use to get the most out of their harvesting season.

These John Deere combine models provide top of the line rotary threshing while working with all types of crops, no matter the conditions farmers may be facing. This level of productivity is achieved through regular updates to both the machines themselves and to John Deere’s harvest apps, including MyOperations, Connect Mobile, and GoHarvest.

The John Deere T670 Combine offers several features designed to improve the threshing and separating process, including single-point feederhouse latching, a mass-flow sensor, and reel resume in-cab control. This combine model also has one of the largest active separation areas in the market, offering maximum capacity while harvesting small grains.

Operators can automate the harvesting process by using a selection of corn heads from John Deere that feature knife stalk rolls for better stalk control, AutoTrac™ RowSense™, and more.

By using a draper alongside their John Deere combine, operators will benefit from features such as timed dual knife drive and a cutterbar that is close to the ground for the lowest-possible cut height.

John Deere 600 Series HydraFlex™ Platforms were designed to match the capabilities of the company’s S-Series Combines while also equipping these machines with a range of performance-boosting features while harvesting.

This platform ensures smooth crop-gathering and feeding performance in windrowed grain – this is achieved through the inclusion of Deere’s FieldGlide suspension system and a dual-belt draper.

Operators have a choice of various pieces of John Deere equipment to enjoy a productive cotton harvest while also conserving fiber quality. This includes the CP690 Cotton Picker, the CS690 Cotton Stripper, and the CM11 Cotton Module Handler.

By looking back on John Deere history and seeing the timeline of equipment production, we can better understand the important role this company has played around the world for over a century. While nobody fully knows what is in store for the future of John Deere harvest equipment, it is safe to say that, based on these milestones, exciting things lie ahead.

If you have any questions about this range of harvest equipment, you can contact your local John Deere dealer.